Thoughts on the New NYC Framework for Great Schools

I’ve had the great fortune of working at the New York City Department of Education this summer, an especially incredible opportunity given the timing. On July 1st, the NYCDOE underwent a complete restructuring–Borough Field Support Centers are in, and Networks and Clusters are out. Perhaps I will write a longer blog post about this change in the future, but for now I will just summarize the transition by saying that, like all changes in large urban education systems, it has some good and some bad, but we all have to be impressed merely by the fact that it is happening. Even better, it is happening thoughtfully and speedily, at least thus far. Rather than discuss the method of implementation of this new structure or the organization of the structure itself (both of which are completely fascinating), I want to speak a bit about the overarching initiative being launched in the NYCDOE, called Strong Schools, Strong Communities. 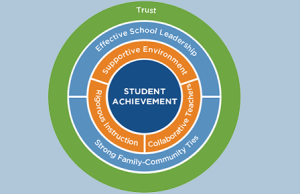 The Framework lists the six components that Chancellor Fariña and the current administration boast as crucial to school success: Rigorous Instruction, Collaborative Teachers, Supportive Environment, Effective School Leadership, Strong Family-Community Ties, and Trust, all of which contribute to the main goal of Student Achievement.

Does this graphic look familiar to anyone? Do these values sound familiar? If you have ever read anything about school reform in the state of Illinois, then these should sound very familiar. Illinois adopted the 5Essentials metrics of school success from seminal research that has emerged from the University of Chicago’s Urban Education Institute over the past two decades. Here is the diagram of the 5Essentials: 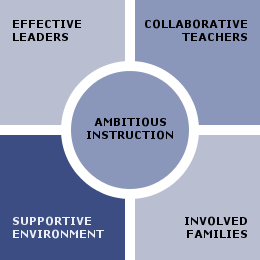 The 5Essentials Survey tool measures schools’ success in implementing 5 “essential” components of a successful educational organization: Effective Leaders, Collaborative Teachers, Supportive Environment, Involved Families, and Ambitious Instruction. According to rigorous research performed at the University of Chicago, schools that rate well on at least three of the components of the 5Essentials are ten times more likely to improve in mathematics and reading. Measuring schools in these areas has been an important step in the direction of progress for Chicago’s schools, and there’s no reason that New York shouldn’t benefit from this extensive and revealing research as well. It’s really quite brilliant, politically speaking–adapting an already existing framework, changing a few words, and calling it a brand new wave of reform measures specifically tailored to NYC students and their communities.

Politically, this is great for the people who claim credit–but in a research sense, this isn’t necessarily the best idea. I say this because I place value in words. I believe that words relay meaning, and when you change words, you change the meaning behind those words, even if–maybe especially if–you’re just a well-meaning politician trying to pass your initiative off as innovative to incite optimism in your constituents.

One difference I noticed, both in its phrasing and its placement in the diagram, is the change from “Ambitious Instruction” as a centerpiece to “Rigorous Instruction” as a side element. In terms of phrasing, I reject the notion that “rigorous” is the same as (or better than) “ambitious.” Ambitious instruction inherently takes students into consideration; it means that classes are demanding for students. On the other hand, rigor is an objective term, facilitating the idea that setting standards will automatically lead students to reach those standards. We can make out “rigorous instruction” to mean a lot of different things, but “ambitious instruction” more clearly points to work that engages and is challenging for students, which is made even clearer by the original explanation provided by the researchers who developed the 5Essentials.

To be fair, this is fairly nit-picky. The bigger problem with the change of the instruction is not the type of instruction but the placement of the instruction within the framework. In the original 5Essentials, four elements revolve around a central goal of ambitious instruction. The purpose of creating the 5Essentials was to improve schools, and the goal in improving schools is to support ambitious instruction. It is only right that instruction should be the centerpiece, as it is in the 5Essentials. However, in the Framework for Great Schools, the centerpiece is “Student Achievement.” As we all know, student achievement can mean a lot of things. To some, achievement is measured by test scores; to others, it is measured by demonstrations of creativity. Every single teacher in the world likely has a different notion of what constitutes student achievement, and this may even be different for each student.

This change in the nature of achievement as a centerpiece is further reflected by the change of the phrase “Involved Families” to “Strong Family-Community Ties.” The 5Essentials defines Involved Families: “The entire school staff builds strong relationships with families and communities to support learning.” Contrastingly, the NYCDOE website defines Strong Family-Community Ties as the creation of “welcoming environments for families and take advantage of community resources to enrich the civic life of the school.” In the NYCDOE definition, there is no mention of “learning” in the family component to the school; instead, the school acts as a hub of civic engagement. While providing a space for civic engagement is an admirable objective, the NYCDOE fails to recognize that families need to come to schools and be engaged in student learning in order to improve achievement. By failing to mention family engagement in the educational aspect of the schoolhouse, the NYCDOE Framework comes off as a thinly veiled attempt to use school reform as a cover for implementing additional progressive economic and political agendas. While the agendas themselves may be wonderful, infiltrating a rigorously researched framework for school improvement with these agendas may weaken the ability of the framework to serve as a valuable research tool and evaluation metric.

Probably the most noticeable change is the addition of “Trust” to the NYC Framework. Frankly, I almost laughed the first time I saw this. Don’t get me wrong: trust is incredibly important to the development of both the student and the school community. But the addition of trust to what are otherwise the original elements of the 5Essentials is worrying because trust is probably even less measurable than student achievement or community civic engagement. With the addition of trust, the NYCDOE has turned the 5Essentials tool from a focused, rigorous, research-based evaluation tool to a patchwork collection of vague, nice-sounding ideas about how each child’s life should look rather than a tool for determining how it does look. This Framework aims to simultaneously improve each and every facet of the child’s life; after all, the name of the umbrella initiative is about Strong Schools and Strong Communities. Both of these institutions work together to influence youth development, but so does every aspect of society. If we continue to merge various institutions and improvement efforts until we live under one umbrella initiative called Strong Schools-Communities-Economies-Families-Hospitals-Libraries-Police, social, economic, and political variables will become completely incapable of being isolated and studied, and we will lose the ability to institute rigorous research-based policy.

In short, by implementing a fantastic framework for school success, the NYCDOE may accidentally destroy both the Framework and the impetus for school improvement.