Who Should be Advocating for Students? 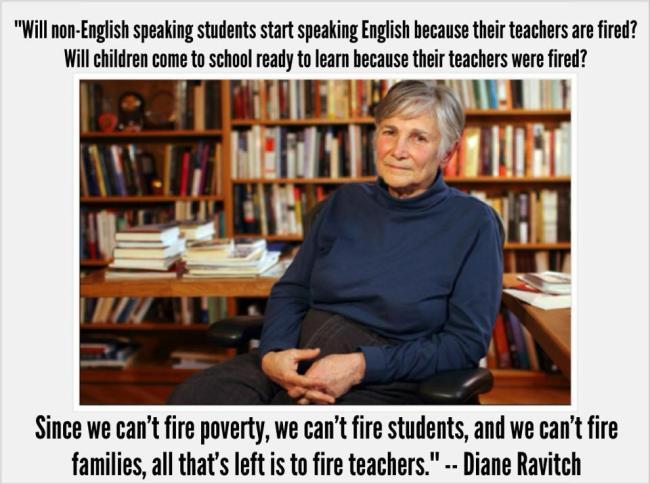 Today’s post won’t be too long (as you can tell, I’ve been much busier lately, and also pretty exhausted). But I saw this picture/meme/what-have-you online yesterday and loved it so much that I have spent some time pondering the subtext of this very real and traumatic truth that Ravitch is pointing to.

One thing that pops out to me from this meme is that teachers need–and not only need, but deserve–protection. I’ve been doing some interesting reading on the history of teachers’ unions and the political controversies on the matter, but the truth is, teachers’ unions must exist for all of us, not just for the teachers. Teachers’ unions were established to help protect teachers from unfair treatment and arbitrary dismissal. While it may be true that the presence of unions makes it more difficult to fire ineffective teachers, I do not believe that getting rid of unions is the answer. You see, with unions, it is harder to fire teachers; without unions, teachers may be fired arbitrarily, dismissed on grounds of race, religion, sexual orientation, or other personal characteristics, and are unable to defend themselves against harassment from employers.

But this brings us to another part of the issue–are unions doing enough to protect teachers? Under the reign of all-powerful high-stakes testing, teachers are evaluated partially based on their students’ test scores. These evaluations then play a role in the decision in which teachers should be laid off. Frankly, I see very little difference between pre-unionized teachers being fired arbitrarily (ultimately, based on race, religion, gender, etc.) and teachers being fired based on arbitrary test scores.

In fact, the situation we face today may be even worse, since the teachers who are laid off are often the teachers who are most needed. Students with the lowest test scores often come from low-income or poverty-stricken neighborhoods and frequently live in households with little to no sense of consistency or stability. For these students, having teachers laid off and replaced frequently by young, temporary Teach for America idealists takes away one of the few sources of stability that exists in their lives. And needless to say, stability and consistency dramatically increase a child’s sense of safety, and ultimately increases the child’s ability to achieve, both academically and in all other aspects of life.

Teachers are constantly being laid off where they are needed most, and it seems that teachers’ unions are doing relatively little to stop it. Whether it’s because they can’t or they won’t, I’m not entirely sure. To be fair, this doesn’t go for everyone–particularly in Chicago, the CTU has done an outstanding job of standing up for its teachers amid the chaos of school closure announcements and massive layoffs.

Even in Chicago, the students have begun to lose faith in the abilities of their teachers. They are establishing a union for themselves, a union of students. This is an amazing example of students joining together and taking civic education into their own hands. I am impressed by the efforts up until now, hope they continue, and hope that students from around the country will pay attention and join the movement to give students a voice in their own education.

Having said that, I believe that the fact that a students’ union is forming–and the fact that it is clearly needed–is in some ways unfortunate. It means that the teachers’ unions are not paying attention to the underlying issue at hand. Maybe in all the fighting for higher teacher salaries, the teachers’ unions have forgotten that they must stand strong and advocate for their students as well. However, I can’t fairly say that this is the fault of the unions. Maybe there needs to be another union to advocate specifically for students, because god knows the teachers have enough to fight for concerning their own livelihood.

Students need someone to advocate for their education. When the only students who receive a good education are the ones who fight for it, then we end up missing out on the opportunity to inspire millions of students who don’t know how to fight or don’t know anything better to fight for. I believe the government should be advocating for students’ rights to a proper education. The government often forgets that it shares the goals of the students: to learn more, achieve more, and participate more in today’s globalized economy. But the government continues to take opportunities away from students, in the form of teacher layoffs, budget cuts, and replacing opportunities for creativity with forced constant test prep. Out of frustration and desperation, politicians continue to hurt students, and by doing so, they continue to hurt our nation.